skip to main | skip to sidebar

Posted by Mario Villafuerte at 8:10 AM No comments:

NOLA RECOVERY: One Meal at a Time 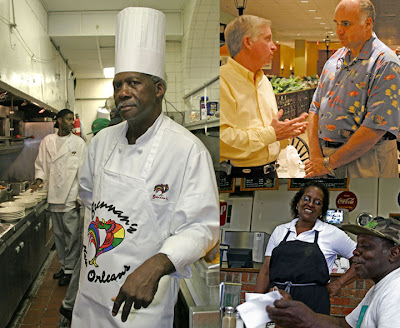 August 29, 2007 edition
Christian Science Monitor
By Mario Villafuerte Contributor to The Christian Science Monitor
Caption: Chef Lazone Randolph,left, Tommy Cvitanovich,Top right,Virgina Johnson, Lower Right.
New Orleans-The devastating impact of hurricane Katrina hit New Orleans restaurant owners and chefs doubly hard: They had to worry about rebuilding their destroyed homes at the same time they needed to get their businesses up and running again as quickly as possible. Not just because the restaurants were their source of income, but employees needed jobs and the city's legendary food was important to drawing visitors back to the city.
For restaurateurs Tommy Cvitanovich, Lazone Randolph, and Virginia Johnson, giving up simply wasn't an option. Instead, they were determined to rise from the flooded streets, dry themselves off, and re-create their businesses and their personal lives. Their survival skills have proved stronger than lack of governmental hurricane assistance and insurance company hassles.
When it comes to rebuilding New Orleans, Mr. Cvitanovich, Mr. Randolph, and Ms. Johnson are working to accomplish it one meal at a time.

For Tommy Cvitanovich, owner of Drago's Seafood restaurants, belief in the recovery of coastal Louisiana is anchored deeply in his Crescent City roots. His family has been serving shrimp and other specialities in the "Fat City" area of Metairie (a New Orleans suburb) for about two decades.
After Drago's sustained major damage and Cvitanovich's home was torn apart by Katrina's wind and rain, he began serving free hot meals at the restaurant's front doors. At first using his own food and money and then with the assistance of his suppliers, Cvitanovich cooked and gave away 77,000 lunches.
During the eight weeks he did that, Cvitanovich also cooked in front of a church in the devastated Lakeview area of New Orleans, feeding all comers.
Cvitanovich was inspired by a similar act of kindness that took place when Ruth Fertel, the original owner of Ruth's Chris Steak House, prepared meals for recovery workers after hurricane Betsy in l965.
"I remember a photo of Fertel giving out food to people at the door of her restaurant," he says. "That's where the thought came from, and anything worth doing is worth overdoing [on a much larger scale]."
The Saturday-night cacophony of hundreds of diners at Drago's new restaurant at the New Orleans Hilton is a sweet sound for Cvitanovich, who opened the eatery three months ago in addition to his Metairie location. It's noisy evidence that New Orleans's restaurant recovery is well under way. Up and running again in two months

In post-Katrina New Orleans, the sound of gospel music and the aroma of slabs of pork ribs smoking over a hickory fire are the two greatest rewards Virginia Johnson could have in her life.
Johnson owns Ms. Hyster's Bar-B-Que, an institution in the Crescent City for more than 35 years, which is located within sight of the Louisiana Superdome.
It was resurrected by the faith of Johnson and her husband, Rufus, and propelled by their sweat and determination to reopen.
"When you look back, it was grueling," she says of their efforts, "but I couldn't feel sorry or sad, because it wasn't going to help me." It took much perspiration, scrubbing, cooking, and praying for the Johnsons to reopen the doors of Ms. Hyster's on Dec. 1, 2005, just three months after the breached levees flooded vast areas of the city.
Doubters in Johnson's life questioned whether it was sensible to return to business in an area where scores of houses were uninhabitable, piles of debris stood where trees once grew, and basic electrical and telephone service was rare.
Instead of neighbors (who had all left town), Johnson was surrounded by members of the National Guard, law enforcement officials, and workers removing tons of debris. Those became her first customers. "The morning we fired up those smokers and the aroma went out, [there was] joy when we opened the doors and they [customers] came pouring in. It was the greatest feeling," Johnson says.
Since then, she has fed hundreds of returning residents. Ms. Hyster's revival is a reminder to many displaced New Orleanians of how wonderful home cooking can be. The familiar and comforting taste of tender pork ribs or juicy chicken smothered in a vinegary sauce revives joyful memories that Katrina almost drowned.
Although Johnson understands when some former residents decide to stay in Houston and other new cities, she hopes her example of restoration will encourage others. "We've got to come back!" she says. "Because what else are we going to do and where else are we going to go?"
He lived at Brennan's for two weeks

As looting occurred on flooded Canal Street in downtown New Orleans, Lazone Randolph, executive chef at Brennan's Restaurant – along with Jimmy Brennan, one of the owners, and some staffers and family – took refuge in the famous French Quarter eatery.
The restaurant proved to be a well-stocked cocoon of safety for them as well as home and fortress for two weeks. Still, the culinary refugees were isolated from the world, unaware of the human tragedy happening at the convention center and Superdome. A battery-powered radio and a working phone weren't enough to keep them well informed. "We had no idea that it would turn out to be disastrous, and we had no idea that the city would go under the way it did," says Randolph.
When he was finally able to check on his home across the Mississippi River in Algiers, he was shocked at the enormity of the disaster.
The cost of returning Brennan's to its former sophisticated atmosphere was high. Reconstruction and replacement of the restaurant's décor, furnishings, and equipment cost hundreds of thousands of dollars. Wine valued at $1 million was lost. "I talked to people who didn't think the restaurant was going to come back," says Randolph.
For the nine months that Brennan's was closed, Randolph oversaw every aspect of its rebirth. "My responsibility is to the restaurant, the Brennan family, and the reputation of the restaurant," he says. "People come from around the world to experience and taste what we do here."
Copyright: Christian Science Monitor 2007
Posted by Mario Villafuerte at 11:22 AM No comments:

Mario Villafuerte
INTRODUCTION: Louisiana is renowned for chefs who create dishes that fulfill diners from around the world. Though the Bayou State is best known for its seafood cuisine, the gumbo mix of, Cajun, Creole, African-American, French and Spanish cultures provide the gulf-state with a large menu of chefs to prepare those foods. This story begins a series of stories focusing regional chefs both well-known and undiscovered.